As many couldn’t join the Südkurve backstage celebrations in Munich to mark the 115th anniversary of the foundation of FC Bayern, the Red Dragons decided to have their own birthday party – with well over thirty members packed into our little corner of the Bavarian Beerhouse in London.

On 27th February 1900 a small breakaway group of Munich gymnastic club MTV 1879, led by Franz John, formed a new football club – FC Bayern München. The rest, as they say, is history – and 115 years later we can look at a club that sits at the very top of world football. A proud football club with millions of supporters all over the world, yet one that remains proud of its history and humble beginnings.

To mark our own celebration of FC Bayern’s 115th birthday, our chairman Thorsten had a special cake prepared – a wonderful rendition of the Allianz Arena – as well as a number of Dragon Muffins with edible paper. A new flag was ordered, and the board and a number of helpers arrived in the late afternoon to decorate the room with red and white streamers, bunting and balloons.

With the room prepared and as the kick-off time drew near the guests started to flood in, and very quickly everybody was getting ready for the main event – the game against 1. FC Köln. Apart perhaps from Borussia Dortmund, Hamburger SV or Werder Bremen it was the perfect opponent to mark the occasion – the Rhineland carnival city, one of FC Bayern’s classic “old school” rivals from the 1970s and 1980s.

Pre-match there was some fantastic choreography from the Südkurve, and as things kicked off there were plenty of cheers and clanking of glasses at the Beerhouse. The Red Dragons were all in good voice, belting out some of the old Südkurve classics as well as a number of new songs.

On the pitch, the team responded to the cheers of the crowd with two early goals, and although Köln pulled one back just before half-time two more strikes in the second half wrapped up a convincing 4-1 win. We couldn’t have asked for a better set of goal scorers either: the opener was scored by “Fussballgott” Bastian Schweinsteiger, numbers two and three went to own two deadly wingers “Team Robbéry”, and the final goal came from one of our more recent additions, Robert Lewandowski.

With the main course having been delivered by the team, it was time for the presentation of the cake. The lights were dimmed, and Thorsten emerged with the cake as we all sang “Happy Birthday” to FC Bayern. Also celebrating his birthday was Red Dragon Robert, and there were plenty of toasts and “Prosts” all round. Oh, and the special FC Bayern muffins!

As people munched on their München muffins and got their own slice of the Allianz we rounded things off with a special FC Bayern pub quiz, with Greg as Master of Ceremonies and Rick as the expert question-setter. After a chaotic start everybody quickly got into the spirit of things, and at the end there was a tie-break between Dragons Amber and Sebastian. Faced with this unforeseen situation Rick quickly set up an “Elfmeterschiessen” to settle the issue, and right at the death Sebastian claimed the prize!

It had been a fantastic evening, after a final beer everybody said their farewells – with a few night owls heading to Thorsten’s place for an impromptu after party and more celebrations. 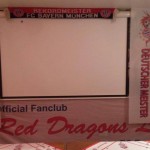 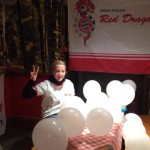 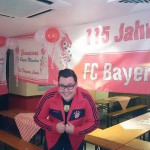 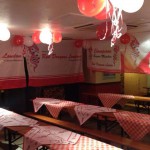 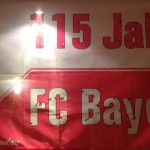 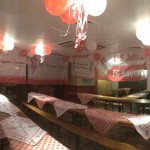 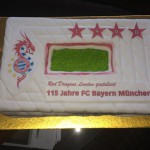 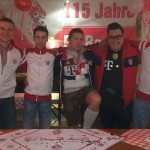 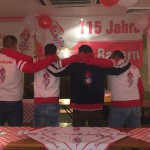 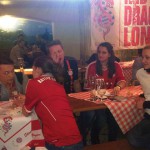 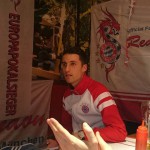 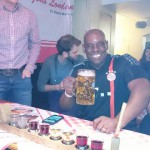 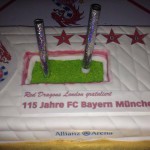 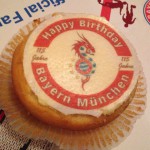 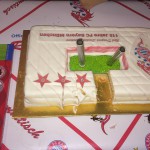 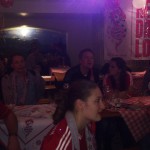