FC Bayern’s season ended with another glorious league and cup double, but for the Red Dragons things continued well into the summer with the 2014 World Cup in Brazil, with no fewer than seven Bayern players in the German national team. This saw the fan club’s logo transform from a Dragon with Bavarian into German colours, with a special flag being created for the occasion as we cheered Bayern & Friends onto victory in Rio!

The opening group game against Portugal saw the Dragons host other Germany fans at our lair in Old Street, and Munich hero Thomas Müller got things under way with a superb hat-trick as the Nationalmannschaft sent Cristiano Ronaldo and his boys packing.

The second game against Ghana was considerably less fulfilling as the team eked out a 2-2 draw, but once again a Bayern player would feature with Mario Götze scoring the opening goal. Some of the Red Dragons then left their lair to join an outdoor party in London, and despite the slightly disappointing result more fun was had by all, with the “Red Dragons Deutschland” flag being waved proudly!

Müller was the only scorer as Germany edged out the United States in their final group match and made sure of their place in the knock-out stage, and after a tight second round game against Algeria that went into extra time the scene was set for a classic old school encounter against France at the Maracanã. Ex-Bayern youth product Mats Hummels scored the only foal of the game, and the atmosphere at the Beerhouse in Old Street was fantastic as a a number of French supporters joined us in the festivities. As usual our chairman Thorsten took the lead, rehashing a number of Südkurve songs and getting the crowd involved!

Then came the now famous semi-final against hosts Brazil, with Germany setting a bunch of new records as they scalped the men in yellow 7-1. For the Red Dragons cheerin again featured on the score sheet, with Thomas Müller netting the opener and Toni Kroos scoring two nonchalant goals in the space of ninety seconds.

Having disposed of Brazil, Germany had made it to their eighth World Cup final – and their third against old foes Argentina. This was naturally the biggest party of the tournament at the Bavarian Beerhouse, and once again the Red Dragons would lead the way with their crowded Stammtisch decked in flags and scarves – with both Thorsten and board member Rick leading the way with their rehashed FC Bayern songs… Hupf Germania hupf! Olé olé!

The match kicked off to great applause, but as the minutes ticked by it was clear that we were all going to be in for a long evening. In a cagey encounter, there were very few real chances as both teams seemed to cancel each other out.

In a match filled with such tension, there was a sense of inevitability as things went into extra time… And when the winning goal flew in seven minutes from the final whistle the Beerhouse simply exploded. To crown a glorious evening for the Red Dragons the scorer had been yet another Bayern player, Mario Götze!

With everyone in great spirits as the team received the famous gold trophy for the fourth time, it was time for yet another party! 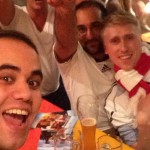 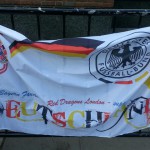 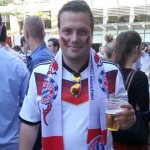 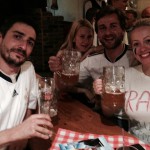 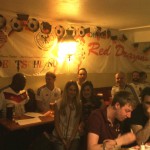 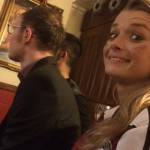 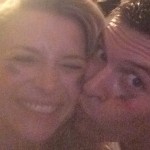 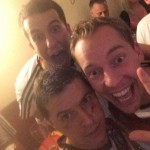 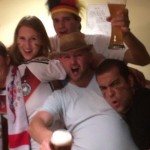 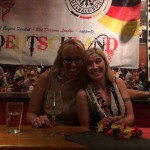 You can read much more about Germany’s World Cup victory – and indeed everything there is to know about the Nationalmannschaft – on Rick Joshua’s Schwarz und Weiß website.