With the Bundesliga season having reached the Winterpause the Red Dragons put together ideas for a Christmas party, but with so many people away during the holiday season it was decided to host a warmup party in January instead.

With everyone back in London in the new year, around twenty people gathered at the Bavarian Beerhouse in Old Street for a traditional German meal and a couple (!) of beers, as well as a presentation by our chairman Thorsten who i his own inimitable style summarised the highlights of what had been a successful first six months for the Red Dragons London.

After the chairman’s speech and dinner the prize was presented to the leader in the fan club bonus list, and special thank yous were offered to all of those fan club members who had worked so hard throughout the season – particularly with the behind the scenes work such as the weekly decoration of our Stammtisch!

The formalities were rounded off with a special friendship agreement with the White Tower Thessaloniki fan club from Greece, who presented our fan club with a flag marking their twentieth anniversary.

The evening’s entertainment then came to an end with an entertaining reprise of FC Bayern’s Champions’ League victory at Wembley against Lüdenscheid-Nord, with all of the Red Dragons able to relive that glorious moment as one! 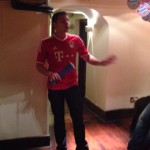 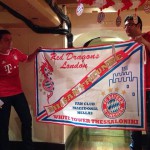 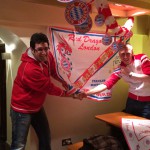 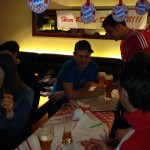 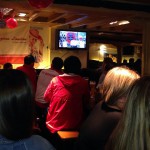 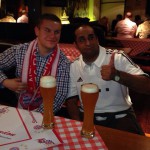 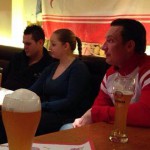 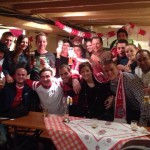