Bayern’s victory over Arsenal had taken them into the last eight, and on 21st March the draw rewarded them with another Premiership team, this time old rivals Manchester United. As soon as the fixtures became known the Red Dragons would start planning their next road trip – and their second journey up to Manchester.

Close to twenty of us made our way up to Manchester, with most heading up by train and others by car. The streets of Manchester were filled with red and white, and after refuelling at one of the many pubs in the city and meeting the Südkurve at Piccadilly Gardens the Red Dragons headed into Old Trafford on the crowded tram – which almost seemed to bounce along keeping time with our songs.

Arriving at the ground we joined the mass of Bayern supporters, orchestrated perfectly in good voice. As we approach the stadium, our chairman Thorsten was interviewed by a camera team from BT Sport who were more than interested in finding out more about this large group of FC Bayern supporters from London!

With a growing number of members and more people wanting tickets the Red Dragons were guaranteed a good representation on our first visit to Old Trafford’s “Theatre of Dreams”, and this was made even better thanks to our friends at FC Bayern Fanclub Nabburg who brought a number of tickets with them as we met outside the ground. There would no little drama as their flight from Germany was diverted to Liverpool, but arrived just in the nick of time!

With the precious tickets safely in hand, the army of Red Dragons unfurled their banner under the watchful eye of Sir Matt Busby and stoked the fires for the upcoming encounter. Bayern’s last visit to Old Trafford at the same stage in 2010 had seen Arjen Robben’s memorable goal take them through to the semi-finals on away goals, and with the Red Devils struggling under manager David Moyes, the time was right for Bayern to come away from Old Trafford with a win.

In the end we had to make do with a 1-1 draw as “Fußballgott” Bastian Schweinsteiger’s 67th-minute goal cancelled out Nemanja Vidić’s effort nine minutes earlier. A draw at Old Trafford is always a good result, but we couldn’t but feel a little disappointed.

Still, the Dragons were in good voice to greet the team as they walked over to us visiting fans at the end – and we were confident that they would finish the job in Munich the following week… Which they did! 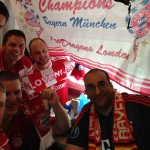 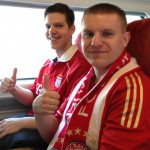 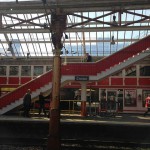 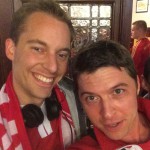 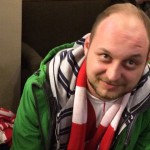 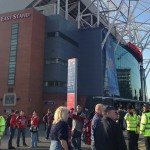 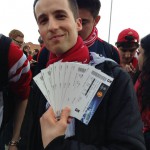 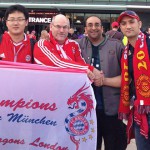 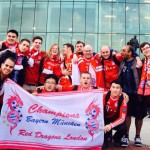 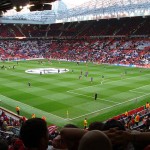 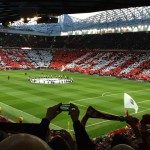 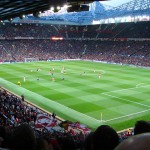 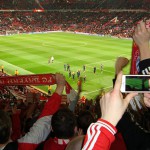 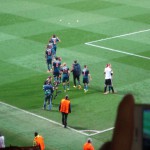