FC Bayern set the scene for a nail-biting cup final

After winning the Bundesliga in record time before the end of March, FC Bayern were right at the top of their game. With a twenty-fourth Meisterschale safely in the locker and the team still involved in both the Champions’ League and DFB-Pokal, some of us had started to dream of another glorious treble.

These hopes would come tumbling down in April, as Real Madrid came to the Allianz Arena and did much they same as what we had done to Barcelona at the Camp Nou just twelve months earlier. With the record unbeaten run in the Bundesliga also being punctured by unheralded FC Augsburg, Bayern’s form began to waver. When FC Lüdenscheid-Nord came to visit and ran off with a 3-0 win against an insipid and at times rudderless Bayern team, a thin layer of pessimism threatened to ruin what had been an encouraging first season for the Catalan coach.

The DFB-Pokalfinale provided us with yet another meeting with the yellow peril, and despite the floating doubts the Red Dragons’ board were determined that the season would not end like this. While we would obviously have no direct impact on the team, the mission was to cheer as loudly as we could, in the hope of transferring some of that magic across the North Sea and onto the Olympiastadion in Berlin.

Red Dragons set the scene for an unforgettable evening

For what was the final act of the Red Dragons’ first season, the board organised the ultimate cup final party at our Old Street Bavarian Beerhouse lair. Over sixty Bayern fans were in attendance including a number of friends and guests, with the gathering also doubling up as a farewell for two of our members. More flags were ordered for the occasion, and as the build-up to the game began a small number of otherwise unwanted BxB interlopers sitting in their eye-bleeding Trikots at the back of the room would add extra spice to the occasion – and provide the perfect static target for some of our favourite terrace tunes.

The match as expected was full of tension, with both sides playing a highly cautious and defensive game – and this tension soon spilled out into the Beerhouse, with each failed effort met with loud groans and each defensive scare greeted with relieved sighs. Beer glasses sat on the table as people preferred to either bite their nails or simply sit on their hands, and you could sense the atmosphere coming to the boil as the game approach the end of the ninety minutes with the almost constant refrain of Auf geht’s Bayern schießt ein Tor!

A goalless ninety minutes signalled the start of extra time, and with the yellow interlopers starting to get louder by the minute the seething red and white army responded in kind. It was just like being in the Südkurve, but with that dash of London spice. Finally, two minutes into the second period of extra time, Wembley hero Arjen Robben set off an explosion of noise – which was even louder than Manchester.

The tension had been transformed into a belief that we could do this, and our unwanted visitors suddenly found themselves face to face with the fire-breathing Red Dragons at the loudest and most relentless. Unable to respond to the onslaught of terrace banter, the yellow lump simply slunk away – never to be heard again.

Thomas Müller then delivered the coup de grâce in injury time to secure the Pokal and yet another domestic double, and we all knew that the party had just started.

It had been a close match, and three Bierstiefel (large boot-shaped glasses full of the Amber nectar) amongst many Jaegertrains were ordered to sooth the many sore throats!

But that was not the end of the evening’s entertainment. Following a major coup by the board a number of Red Dragons then took a twenty-minute “Corso” through the streets of London to our next venue, regaling passers-by with an array of songs from the Südkurve and finding a second voice many of us had long thought lost during the afternoon’s drama.

As the six pedicabs weaved their way through the streets of London, we all made sure that everybody knew that we were FC Bayern supporters… As Arsenal had won the FA Cup on the same day and also wear red and white, we didn’t want anybody mixing us Red Dragons up with a bunch of Gooners!

We arrived at a club where a number of the more resilient Red Dragons then danced the night away, led in no small part by our chairman Thorsten. So would end the first season for the Red Dragons, rounding off a tremendous success story both for the fan club and FC Bayern! 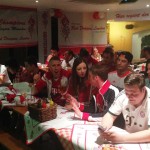 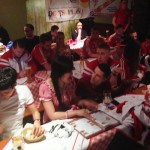 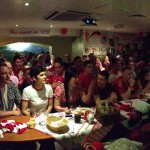 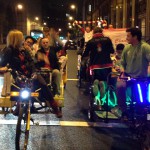 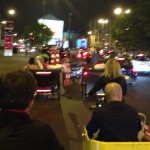 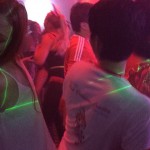