There were plenty of mixed feelings when the Champions’ League draw had once again placed Bayern in the same group as Manchester City for the third time in four years. First came the moans of “oh no, not them again”, but this was soon tempered by the fact that the Red Dragons would have yet another opportunity to take another trip up to the Etihad – and so the planning began.

As the match approached a total of twenty-two Dragons – the biggest your party yet – were soon readying themselves for another meeting with the “Citizens” – though like last time the match was effectively a dead affair with Bayern already through to the knock-out stage with five wins out of five.

With the large number of attendees the board organised a bus for the first time. While some Dragons had planned to fly to Manchester and others set to make their way up the M6 separately – bound by near-impossible work schedules and trips to Transylvania! – most of the party gathered early in the morning in Old Street. Some had left home in the middle of the morning to make their way into London, while others had fought off illness to be there. With the Red Dragons, there is never any lack of commitment!

Despite the early departure and some people still recovering from lack of sleep, the mood was good. There was plenty of cheering and singing as everybody revised the best hits from the Südkurve songbook, and there was even a strange moment at the first fuel stop where a mysterious yellow figure was spotted. Wearing a distinctive polka dot bandanna, it could only have been Jürgen Klopp incognito – with the resemblance to Pudsey bear a complete coincidence. He looked remarkably happy for a guy whose team is competing with the likes of Freiburg and Hertha Berlin for a relegation playoff place!

The M6 motorway is hardly the most scenic route in Britain and the weather was not great, and after a bite to eat and another “emergency” stop a few minutes before arrival the sense of anticipation was building.

The bus arrived in Manchester just after 1pm, and by mid-afternoon everyone had made their way to our meeting point at the Wetherspoons pub where we saw all the familiar faces, including our friends from Rotweiß Südheide. Soon we were all together, and despite a rather officious security person kicking up a fuss about our singing in German spirits were high. The fact that the party-pooper looked like a Doofmunder in his eye-bleeding bright yellow hi-vis jacket certainly didn’t help. Thankfully the bar manager and a few friendly City fans sitting at nearby tables helped send him on his way!

After a few drinks and some food was soon time to head out to Piccadilly Gardens, and from there take the walk to the stadium. As we approached the atmosphere began to build, and very soon the red and white army were making their presence felt – often getting cheers from local sources. Yes, this was one day that the red side of Manchester could also be found rooting for the Reds from Bavaria.

A great battle with only ten men

Having made our way into the ground, we quickly found our seats – close to the action, and together with the Schickeria. Before the match, both sets of fans were united in turning their back on the playing of the UEFA anthem as a protest against the organisation’s shoddy treatment of away fans in Moscow.

The match itself was a topsy-turvy affair, with Bayern very quickly on the back foot after twenty-two minutes. Sergio Agüero was bundled over by Medhi Benatia with the Bayern full-back being shown the red card, and despite our attempt to shout him down Agüero slotted the spot-kick past Manuel Neuer. Against a team like City – themselves needing a win to have a hope of making the knockout stages – it was always going to be tough, but with ten men it was going to be close to impossible. But Bayern rallied – and oh, how we rallied!

Five minutes from half-time Xabi Alonso levelled the scores with a smart free-kick, and seconds before the break the red end were ecstatic as Robert Lewandowski nodded the ball past Joe Hart in the City goal. 2-1! Wahnsinn! We’d keep the lead until five minutes from the end, when disaster struck. A hospital pass from Alonso set up Agüero for the equaliser, and a minute into added time the Argentinian seized upon an error by Boateng to turn the game on its head. Bayern were well clear at the top of the group, but for all of us who had made their way up to Manchester it was a crushing blow.

After two wins and a draw on our travels, it was also the Dragons’ first taste of defeat on the road.

The result was disappointing, but there had been plenty of positives to take away. To fight back from a goal down and take the lead with ten men was nothing short of amazing, and it was just a shame that the team couldn’t see it out until the end. In the end the result had meant far more to City than us, but slightly irritating was the fact that we’d have to wait at least another year before going six from six in the group stage.

All of us slowly started to make our way out of the group and towards the meeting point at McDonalds, with nobody looking forward to the long drive home. As it started to drizzle, yet another “Flight of the Red Dragons” had come to an end.

When we returned home and watched the repeat of the match, we discovered that a number of us had also made it onto Sky Deutschland’s pictures. Yet another first for the Red Dragons London!

You can find the full match report here. 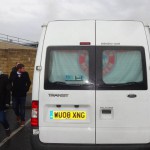 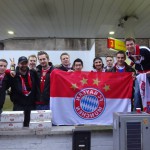 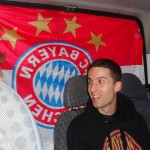 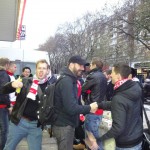 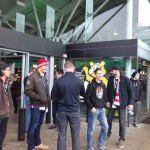 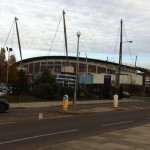 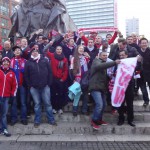 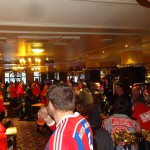 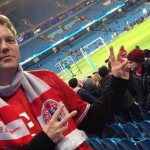 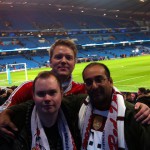 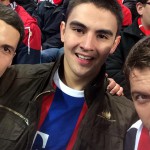 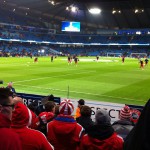 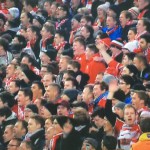