The draw and excitement for our very first overseas trip

When the draw was made for the group phase of the Champions’ League in August the tension was high! Who would we meet? Was it Paris, Liverpool, or even Maribor, where our Slovenian friends reside? There first two lots were rather disillusioning with yet again CSKA Moscow and Manchester City cropping up. However when Serie A side AS Roma were drawn last out of the pot to complete the group, the board of the Red Dragons London had one mission: all roads would lead to Rome, the eternal city.

Plans were made early, and some six weeks before the game things were set in motion for the journey to the Italian capital. Flights and accommodation were booked, and as the big day approached the collective sense of excitement had started to grow. When the tickets finally arrived the excitement quickly became very real, and it would just be a matter of counting down the days to the Dragons’ first “flight”. The final mission briefing was set to take place after the 6-0 thrashing of Werder Bremen, and more than twenty people showed up to wish the travelling Dragons good luck.

Spreading our wings and taking off to Roma!

Monday would drag on and the night was a sleepless one for many, but on Tuesday morning half a dozen Dragons took off from Stansted Airport with their course set to the small airport at Ciampino, south of the city. After being met by the Carabinieri and experiencing a somewhat hairy taxi ride to our hotel – for many, a first real introduction to driving in Rome – arrangements were frantically made for the afternoon’s gathering with our friends from other fanclubs and the Südkurve.

The March on Rome!

Having made our way to the Metro stop “Spagna” we headed straight to our first meeting point at the Ristorante “alla Rampa”, where we then met members of the fan club “Die Roten vom Werdenfelser Land” and their chairman Dennis. More Dragons joined the round before finally Martin, Igor and Luka from Navijaški klub FC Bayern Slovenija arrived! After plenty of Perroni and a decent meal two further surprises awaited the happy Dragons – Stephan Lehmann and Paul Breitner!

With their hunger satiated the Dragons made their way with their friends to the Spanish Steps, which had turned into a sea of red and white. As the crowd gathered everybody was in excellent voice, and we met more friends from “Bavaria Chasalla”, “Rot-Weisse Suedheide”, “Stern des Suedens ’95” and “Rot-Weisser Hochwald”. Just after five o’clock the march finally began, and the red and white mass slowly started to snake its way through the tiny back streets of Rome.

The plan had been to gather at the Villa Borghese to catch the shuttle buses to the stadium, but poor organisation would mean that while some Dragons would get to the stadium early, others had to take their chances with the creaking public transport system. One Dragon would “lose” his mobile phone in a crowded tram, but even this disheartening moment wouldn’t dent the growing sense of anticipation.

Everyone made their way to the historic Stadio Olimpico with no further troubles, and when the second group of Dragons arrived in the stand they were greeted by Dragons’ special “On Tour” flag. We were there, we were inside, we were ready! The atmosphere was electric with the visiting five thousand Bayern supporters listening to one of the world’s greatest opening tunes sung by some 65,000 home supporters and to some even louder firecrackers! The opening chanting was the last to be heard of the AS Roma crowd as the Sükurve belted one song after another.

As if to crown the Dragons’ first overseas journey, the team turned out a world-class performance that was beyond everybody’s wildest dreams. Arjen Robben set things off with a fantastic goal inside the opening ten minutes, and further strikes from Mario Götze, Robert Lewandowski, Robben (again!) and Thomas Müller capped of a quite magnificent first half.

A Roma goal was followed by two more Bayern strikes from substitutes Franck Ribéry and Xherdan Shaqiri, and with the score closing out at 7-1 we had been witness to Bayern’s biggest-ever victory away from home in European competition. Many of the home fans quietly slunk out of the ground early to raucous shouts of “Arriverderci”, but those that remained ended up swapping scarves with some of the Bayern faithful – a fantastic gesture, and more so after seeing their team well and truly thrashed.

All of us were left sitting at the stadium for well over an hour as the local supporters were allowed to dissipate, but with everybody in good spirits the otherwise boring wait was brightened by a selection from the Südkurve songbook. After being released we made our way back into the city on a crowded shuttle bus and a last snack and drink before heading to the Dragon’s lair for the night. Was für ein Tag!

Sightseeing as the perfect closure for a tremendous trip

On the following day many Red Dragons headed home early, but those that remained wound down with a quiet walk around the city to see some of its historic sites and enjoy a traditional pizza lunch. After a meeting with our friends from “Rot-Weisser Hochwald” and some closing drinks, the tour finally came to an end.

It had been an amazing couple of days where the Red Dragons would meet old friends and make new ones. Our first flight overseas following FC Bayern had been an unforgettable experience and complete success! 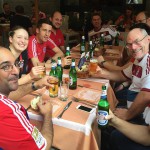 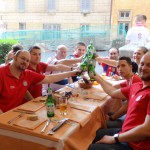 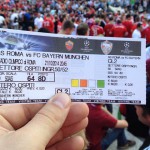 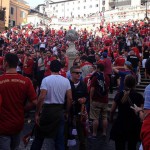 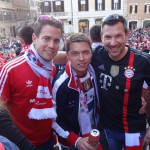 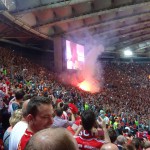 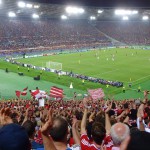 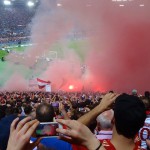 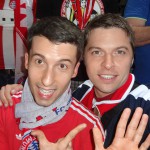 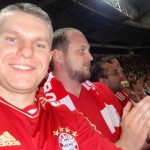 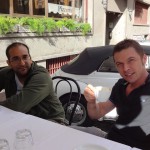 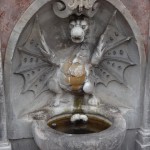 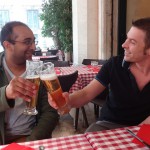 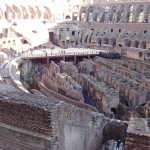