FC Bayern’s fantastic six-goal thrashing of FC Porto in the Champions League quarter-final took Die Roten to yet another appearance in the last four, and a repeat of the 2012/13 match-up against FC Barcelona. A great and historic tie between two great teams, but one with an extra edge as with Bayern coach Pep Guardiola heading back to his old team.

Tickets… A dream becomes a reality

For the Red Dragons hopes for a match ticket started out as a bit of a long shot, with many thousands of Bayern fans applying for just a few thousand seats – and nobody was really expecting anything. However when our chairman Thorsten announced that we had secured five arrangements were made at a lightning pace to sort out the flights and accommodation.

There was no time to lose, and four Dragons – Rick, Amber, Björn and Kornel – were quickly on the internet before every room in Barcelona was sold out. Sadly Thorsten was unable to make it, but the fifth ticket was quickly allocated for one of our friends with the fan club “Die Roten vom Werdenfelser Land”.

With Amber having to fly back earlier the following day she booked a hotel close to the airport, and after a little messing about with cancelled reservations Rick finally got a very nice room for the rest of the travelling Dragons just around the corner from Las Ramblas – the buzzing centre of Barcelona. Better still, it was just around the corner from the fantastic La Boqeria market.

The tickets themselves arrived from FC Bayern the day before the match, and the task of collecting them from Thorsten was left to Amber – who now had the responsibility not to miss her flight and leave the rest of us stranded in Barcelona without a ticket!

The plan comes together

With all four of us arriving on separate flights the organisation was not as easy as it had been in Rome, but Björn was already there when Rick arrived, and not long afterwards Amber made her way into Barcelona’s small airport terminal, with tickets in hand! With Kornel set to arrive a little later, we distributed the tickets. Amber took the bus to drop off her bags at her hotel, while Rick and Björn headed to the centre and the hotel.

After checking in and having a quick beer at La Boqueria, Rick and Björn met up with Dennis and the guys from the Werdenfelser Land, and soon afterwards Amber arrived. Then, to complete what was a well-executed plan, Kornel arrived to meet us in an Italian restaurant just across the road from the market. After a pizza and a chilled beer served in very German-looking glasses, we were all set for the march to the Camp Nou!

It was hard to believe… The Red Dragons were with FC Bayern, marching to the famous Camp Nou!

The March to the Camp Nou

We jumped on the Metro and headed out to Placa de Spagna where the other Bayern fans were gathering, and the march began. There was plenty of time to sing almost every song we could remember as we moved through the streets of Barcelona, and as we approached the ground the sense of expectation started to build.

As we approached the stadium we met again with a number of friends from other fan clubs, and soon it was time to move towards the ground. The outside of the Camp Nou was not actually that impressive and looked a little like a building site, but once we were inside it was just amazing.

With no roof we got plenty of the late spring sunshine, but as the kick-off time approached things started to cool just nicely. With everybody in good voice, we were all ready. Nobody expected a repeat of the 2013 show, but a draw would do us just fine.

Up until the final fifteen minutes, all was great. Barcelona were the better team, but Bayern were hanging in there and looking good to take a goalless draw back to Munich. Then, disaster. Barca opened the scoring with thirteen minutes left, and hit a second goal three minutes later. Then, right at the death, a third.

The bright mood was completely flattened, but as we waited to be let out some people started to sing again. True to the words of Stern des Südens, in both good and bad times, every Bayern fan stood together.

As we made our way out of the ground we met up with Dennis before Amber set off for her hotel, and Rick, Björn and Kornel headed back into the city centre for a last snack before making their way back to the hotel. The result had not been great and the deficit was just too big for Bayern to turn around in the second leg, but it had been an unforgettable experience for everybody that had made the journey.

Barcelona is a fantastic city, but there’s nothing quite like being there with the Red Dragons when FC Bayern are in town. What is certain is that FC Bayern, and the Red Dragons London, will be back! 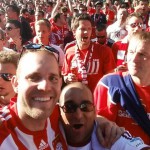 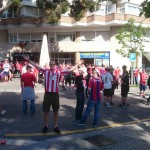 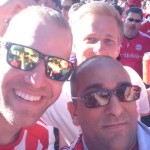 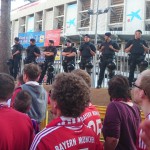 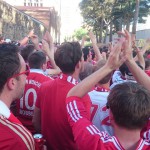 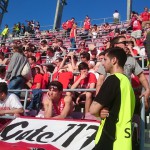 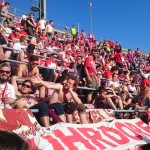 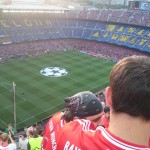 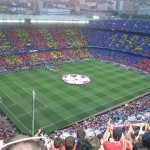 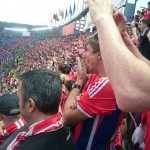 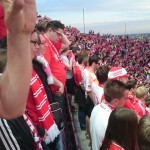