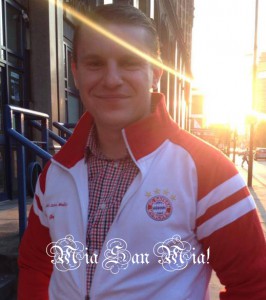 Everything started when watching the memorable Champions League final in 199T and I was wearing my beloved Trikot 19 of Jancker. I really gave huge credit for Die Roten, even they still lost the game. After victory in 2001 I had no doubts who is strongest football heart. Nothing has changed my feelings so far!

I have signed up for Red Dragons because it became obvious very quickly it will take me closer to FCB and into the fans’ world.

It is a shared idea of creating Bayern community in London for fans. MIA SAN MIA!