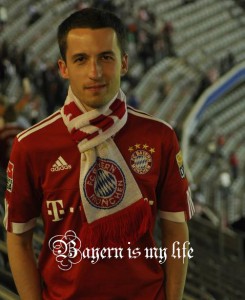 I have supported Bayern Munich since I was five years old (1990). My father always supported Bayern and watching the Bundesliga from week to week with him since I was a little kid made me choose a German team as I became a fan of German football. Then seeing players like Augenthaler, Ziege, Effenberg, Thon etc. made my decision even easier.

I signed up as it was boring watching Bayern games online and wanted to meet other people who supported the team. Going with them to see our beloved team live in the stadiums and supporting Bayern is better than an orgasm. Well, almost!

I like that our fan club is very very organised (thanks to our chairman), always looking for improvement and new members, and keeps in touch (by emails, Facebook, Twitter) with the members very often. And of course not to forget to mention that the board always tries to accommodate the members by trying to get tickets for Bayern games.